The Story of the Fried Clam

The Story of Our New England Fried Clams

Over 100 years ago on July 3rd, 1916, Lawrence “Chubby” Woodman, at the humorous suggestion of a friend, fried up a few clams at his roadside stand in Essex, Massachusetts and the original New England fried clams were born. This is the rest of the story! 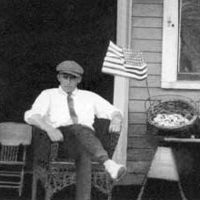 In 1914, Chubby and his wife Bessie opened a small concession stand on Main Street in Essex. On weekends they sold small grocery items, homemade potato chips, and fresh clams that Chubby dug himself. At first business was slow but on July 3, 1916 things began to change.

It was on that day in 1916 that a local fisherman named Tarr (his first name long forgotten) stopped by the stand and Chubby complained that, “Business was slower than a couple of snails headed uphill.” Tarr, while nibbling on the tasty homemade potato chips, noticed a bucket of clams nearby. Tarr pointed at them and jokingly said, “Why don’t you fry up some of your clams? If they’re as tasty as those potato chips of yours, you’ll never have to worry about having enough customers.”

Fried clams were unheard of, and Tarr’s comment was rewarded with cold stares from two other customers. “That’s ridiculous!” said one. The other one remarked, “Clams have shells.” The poor fisherman muttered, “I wasn’t serious, it was just a little joke. I know you can’t fry clams like chips!” 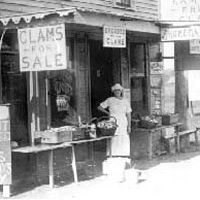 However, when the three patrons left, Chubby and Bessie started to think. What if we did fry up some of the clams and sold them? “Let’s try it,” Bessie said, as she tossed a slab of lard into the fry pot normally used to make potato chips. So they shucked some clams out of the shell, experimented with different batters and called over some locals to give them a taste. When the overall verdict was “delicious!” they knew they were on to something big. The next day, during the 4th of July parade, Chubby and Bessie presented the first fried clam to the citizens of Essex and the world has never been the same since!

A year after the Woodman’s experiment, a Boston fish market advertised that it was “now equipped to serve the new taste treat—fried clams.” Howard Johnson, owner of a chain of restaurants that had 100 spots across the East Coast, arrived in person to learn how to make New England fried clams from Chubby.

On the back of their wedding certificate, Lawrence and Bessie wrote what they considered important family events. The first two lines were the birthdates of their two eldest sons, Wilbur and Henry. The third line was the other important birth date in the family. It read: “We fried the first fried clam—in the town of Essex, July 3, 1916.”

Over 100 years and five generations later, Woodman’s is still frying clams the same way Chubby and Bessie did, where it all began.

Woodman’s of Essex was featured in The Wall Street Journal in an article titled “Happy National Fried Clam Day!” The full text is available in this PDF.

“An American Cult Classic – right up there with baseball and apple pie.”