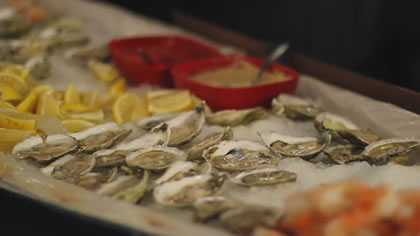 Maureen Woodman: Hi John. Thanks for having me.

Main Courses and Sides at a New England Clambake

John: Sure. Maureen, what is usually the main course at a New England clambake?

Maureen: The main course at a New England Clambake would typically be boiled lobster. Then they would have some chicken. You may have some steak. Woodman’s is very known for their home cooked ribs. Our barbecued ribs are amazing. Sometimes you might have burgers and dogs if you decided to go with more of a barbecue. But I would say mostly it’s lobster – chicken, lobster, [and] steak.

John: Right, and steamers and things like that too?

Maureen: Then the other food, of course, to follow all the side dishes. There would be clam chowder, steamers, mussels, corn on the cob, [and] coleslaw. You may have boiled potatoes. You may have potato salad. You may have macaroni salad. A lot of people right now where green is so popular, we’re doing a lot more green salads in the season. We may do strawberry salads, salads that have fresh fruit associated with them, and of course you’ll have a lot of appetizers and desserts as well.

John: Okay. Let’s talk about those. What are some of the appetizers that work great with this type of clambake food?

Maureen: Two of the appetizers right now [that] Chef Ned’s really been working on would be the summer bruschetta. Most people think of bruschetta always as a tomato, maybe tomato, basil, [and] red onion on a croissant [or] olive oil bread that’s been toasted and then you put it on top. But he’s also come up with a fantastic roasted corn bruschetta that has a pea tendril in it and a little bit of pesto and basil and sometimes feta cheese, if your client can handle the cheese.

John: Corn always goes well with the clambake like you said, so that kind of corn bruschetta sounds really good and would go nice.

Maureen: Yes. It’s pretty. It’s colorful. I think it’s a little bit of a surprise. I think most people are looking for a tomato on that and when they see the corn because it’s summer, I think they feel like it’s festive. Corn is very festive.

John: Yes, you get that yellow and green color.

Maureen: Then, of course, we would have any kind of veggies and dips. Chef Ned is famous for his homemade dips that he makes and he loves to make his vegetables in all different shapes coming out of his garden. We kind of call it Chef Ned’s veggie garden. He makes little animals and shapes sometimes for that. Then we have scallops wrapped in bacon. We also do antipasto skewers, which Chef Ned came up with, where you have almost the version of an antipasto station but it’s all on a stick. What’s nice is it’s compact, you can walk around with it. You can eat it. You don’t have to put it on a plate. It’s just the right amount of food. It has olives and cherry tomatoes and a little piece of capicola or maybe a genoa salami and some kind of cheese. It may have a hard domestic provolone or imported.

John: That sounds great. You have all of those things and then, of course, your main course like you said, with your lobsters and steamers and things like that. I don’t know how you’d have room for dessert afterwards. But maybe you do. What are some of the favorite desserts that you’d serve at the clambake?

Maureen: Of course your most traditional dessert, starting back in the 20’s when we created the clambake menu with Chubby and his wife Bessie, [was watermelon]. We always had watermelon. Watermelon was just regular watermelon. Now you can get seedless watermelon. There’s all kinds of watermelon. They even come in different shapes now. I don’t know how they made watermelon in a different shape, but you see them in a round ball as opposed to an oval shape that you would see years ago. Then, of course, strawberry shortcake where Chef Ned would make traditional Bisquick biscuits. What you’re used to — they’re almost a little bit on the dry side, a little bit flaky. They’re very, very plain in taste but when you use them with fresh homemade whipped cream and then, of course, we use some frozen strawberries just because they have the syrup and then always use fresh strawberries to top. I think that that is just an amazing dessert.

John: It soaks right into the biscuit and it makes it – [like] you said it’s like the biscuit starts off a little bit dry but when you put that syrupy strawberry on it, it moistens right on.

Maureen: Absolutely, and then of course if you’re on the property at Woodman’s and you’re having a clambake, now that we have ice cream on the property, a lot of times we’ll top that off with just a small scoop of vanilla ice cream which just seals the deal. Nothing like it.

John: Okay. What else?

Maureen: The other thing that Chef Ned has been making a lot, we try to add some lemon because a lot of people have a tendency to like lemon. It’s a digestive. Lemon and ginger always seems to go good at the end of a meal. He makes a lemon zabaglione, which is a kind of a take on a lemon pudding or custard, which is whipped and put together in little custard cups and he makes that with a gluten-free French macaroon cookie. [It] shrinks down. It’s the most delicious sugary, stick to your teeth cookie. If you’re really a macaroon person, you know what I’m talking about.

These are the macaroons that you had a hundred years ago and every time you eat one — you even smell the almond in them. You know it’s a really good one and then he tops that with either some kind of seasonal berry, whether it’s a strawberry, a blueberry, a blackberry, or raspberry, or sometimes he multiples them up if they are all in season, but depending on what’s in season. Then he’ll put a little bit of a mint sprig on the top of that. That is fabulous. I recommend that to anyone who’s had Woodman’s clambake for the last 50 years and you want something different.

Then we have a lot of whoopie pies. Whoopie pies started trending, I would say probably five or six years ago. Whoopie pies actually came, I think from the state of Maine, but they have taken on a life of their own. They come in all different flavors and colors and they’re small.

John: They used to be just the plain kind of chocolate ones with the cream filling and now you see the red velvet ones and things like that.

Maureen: Right. Whoopie pies are taking on a seasonality. You might see pumpkin ones. You can have any kind of filling. Some of them are gluten-free. They’re everything that you want, so we can kind of customize those as well. But those would be the four desserts that I would recommend the most.

John: Okay. Are there any special considerations that you should keep in mind with these types of appetizers and desserts, like whether or not you might be holding the clambake on the beach or in your backyard or at a function hall? Does that make a difference in what you might choose?

Maureen: If we were having a clambake on the beach, I would probably go with something that was going to be the most friendly for the temperature and the environment. I would say the watermelon would be really easy or probably the whoopie pies. They’re just a grab and go cookies and brownies. Something that’s a grab and go sweet would probably work the best on the beach because you’re not going to have any refrigeration and you won’t be so affected by the temperature. I think if you’re in your backyard at your house, you have the convenience. Most homes today have refrigerators, so we could put the dessert in the refrigerator while we were doing your clambake and that way you could have any of the four desserts I mentioned, or there’s still a list on our website of more than that. Then of course at our function hall, you could have all these and even you can add an ice cream sundae bar if you wanted, because we would put out the sundae bar right there because we have the freezer available, we could hold everything until the end. I think your biggest concern out of all three choices would be the weather and the refrigeration.

John: All right, that’s great advice Maureen. Thanks again for speaking with me today.

Maureen: Thank you, John. Thanks for having me.

John: For more information about Woodman’s Catering Services, visit the Woodman’s website at woodmans.com or call 978-768-2559.

“Woodman’s of Essex is a culinary destination in and of itself.”