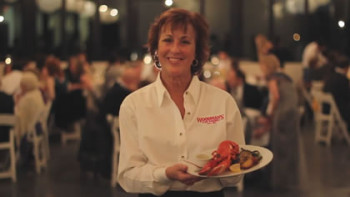 Catering for very large parties at a wedding reception can be challenging for both the bride and groom and the caterer. If you plan on having a big wedding, keep these factors in mind for large party catering.

Maureen:  Hi, John. Thanks for having me.

John:  Sure. Maureen, is catering to parties with say over a thousand people more difficult than catering to smaller parties, and what are some of the differences?

John:  Even a wedding with just a few hundred people, you can end up standing in a line to get food.

Maureen:  Yeah, and I think the most important thing that we have found at Woodman’s since we’ve done so many is the staffing is really important, and the schedule beforehand is really where a lot of work goes into that.

Just the setup, the time management, the flow of the food, and kind of staggering the help. Also, trying to get out and clean and clear the tables. When you have the clam bake food, there’s a lot of trash involved. So, in order to get them to go through the courses, you have to make sure that the tables are empty and the trash is under control.

A lot of times, when we serve the large parties, we use cafeteria‑style trays so that the customer can go through and get all the food at once. Then those trays cause a lot of trash, so just having maybe a crew of 10 just on the trash is something that’s additional, where if you just had a backyard party for 50, that wouldn’t even be a problem.

John:  Do you find that you have to precook a lot of the food or how do you handle getting warm food out to a thousand people?

Maureen:  One of the things we have designed when we started to do a lot of these parties is that we hire runners that go between the food and the food tables. And that person’s job is just to make sure that all the food is replenished on the table and that the food is hot.

So it stays as long as we can get the line through, and then the runner will watch and when it looks like it’s three‑quarters down, he’ll run to the fire to get the food and then replenish again. That’s how we do it, because obviously you’re not going to put food for a thousand out all at once, or just like you said, everything would get cold.

John:  What types of establishments might need catering for very large parties?

Maureen:  In my time at Woodman’s, in the last 20 to 30 years, the largest parties always seem to be school or hospitals, so of course, Mass General, The Brigham, Beth Israel.

We did a very large party when Newton‑Wellesley Hospital won [an award for] the largest, most friendly hospital in the United States.We did a party there that ran 24 hours because, as you can imagine a hospital is going all day. And they thought it was very important that all their employees got the clam bake. We served the clam bake in three shifts through the 24 hours. Pretty interesting.

John:  You have all those doctors and nurses that are coming in and they’re doing the night shift. They’re overnight and they want to eat, too. They want to participate as well.

Even though we do the 50th class reunion, not a lot of people still can go to those because they’re all in their 70s by then. I think that’s a really fun place to do. A lot of time we’ll do them right on the campus. Logistically, you would meet with the facilitator that was the maintenance for the entire property.

We did so much work with Harvard and they just keep Harvard Yard so pristine and they have so many rules to follow. Also in Cambridge, we worked very closely with the Cambridge Fire Department, because another really big concern is safety.

You’ll also have a Board of Health Officer on board, so you want to make sure that all your temperatures are correct and you have all the right equipment. There’s a lot more that goes into feeding thousands of people. But we have really mastered it, I think, more than anyone.

It’s really a niche for Woodman’s. It comes easy now, because we’ve done so many, and we have systems in place to really make sure that it goes flawless.

John:  Is there a difference in the type of food that’s served for a large party versus a smaller party?

Maureen:  A lot of times we’ll cut the menu to accommodate. Because they’re going to take all the food at once, you don’t have that slow two‑and‑a‑half hour eating kind of thing. It seems when we do large parties, they want to eat very quickly, so we put out all of the food at once.

When people see a pound a steamers, a pound of mussels, an ear of corn, a half a chicken, a half a rack of ribs, a lobster, coleslaw, clam chowder, cookies, brownies, cornbread, they’re like, “Oh my god, I’m never going to eat all this food!”

We found that when it’s an all‑in‑one serve like that, the portions should be cut down so that it’s more like a tasting, in a funny way where you still get a lot of food. But usually at these lodge parties, they also have a lot of group activities going on.

So, whether they have to get to a meeting, or an awards ceremony, or there’s games, or sometimes at alumni they bring their children and then they go off to the children’s events. It doesn’t seem like they have that long time.

Again, a specialty of Woodman’s is feeding thousands of people in less than an hour and a half. Most caterers, it just boggles their mind how we can do this so quickly.

John:  Right, as opposed to doing it in shifts and having food coming out in separate courses, so you’d have a salad course. Then after a half an hour, then the main course would start to come out, and that sort of thing. You’re not doing that. You’re trying to get all that food out at once so that people can be done with their food and get on to whatever the event is.

Maureen:  Right. It’s also very important for us to meet with all the vendors that are involved in the large parties. We would meet with the tent man. The floor plan would have to be designed so that the flow of the people could be correct.

Very important to meet with the people that are doing the lighting, the speaking, and the microphones. Make sure that the stage is in the right place so everyone can hear and benefit from the speaker. Or if there’s a band or dancing involved, everyone can go there. So there’s a lot more as well with the layout of the party.

John:  Any other issues that a caterer might run into when catering to a large party, and how does a caterer make sure that the event goes smoothly for these types of large parties?

Maureen:  One of the biggest issues that I would say today is food issues and allergies when you do a large party. One or two people on a small party may have a food issue. But when you start dealing with thousands of people, [it’s different]. I’m doing a party for 850 in a couple weeks and they have over 109 people out of the 800 have a food issue.

Maureen:  So whether it’s nuts, soy, gluten, celiac, or dairy, veggie‑vegan, it’s really interesting to see how many [people have food allergens or sensitivities to food].

John:  That’s like one in eight. Even for a small party that seems like a big percentage.

Maureen:  That’s a lot of people, so you would have to logistically [plan it out.] What we’ll do on this party is we’re going to have an allergy station. We’ll have the two stations for the masses of the group, and then we’ll have one station that’s designated as food issue. That way the people know to go there, because again, you don’t want to mix the food.

You don’t want the food to touch each other. We’ll have a designated cooking crew for that food. That food may be done at home so that we know that it’s not cross‑contaminated. We’ll have different‑color cutting boards, different‑color utensils, everything will be identified. That is definitely something that presents itself differently in a large party.

John:  All right. That’s really great information, Maureen. Thanks again for speaking with me today.

John:  For more information about Woodman’s Catering Services, visit the Woodman’s website at woodmans.com or call 978‑768‑2559.