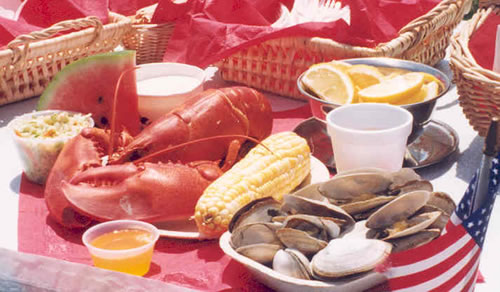 Maureen Woodman: Hi John, thanks for having me today.

A New Spin on the Traditional Clambake

John: Sure. Maureen, when we talk about a beach clambake that maybe Woodman’s is helping somebody to throw, is this the old style, kind of traditional clambake where you go to the beach, you dig a hole and then you start a fire, throw the fire into the hole with rocks and seaweed and all that kind of thing?

Maureen: That’s an old Indian clambake. Our [founder] Chubby Woodman back in 1920 put a new spin on it. He tried to figure out how to make a portable clambake. The original clambake was done by the Indians on the beach where they dug a hole. Everything was layered in the way that it had to cook. Whatever had to cook the longest was on the bottom and whatever had to cook the least was on the top. They would layer it individually and they would cover it with layers of rocks and seaweed. The reason they did that is that the food on the top would actually steam from the bottom up, because the heat would be conducted on the bottom. The lobsters would be on the bottom, the corn would be closer to the bottom. It’d take longer where the steamers would be closer to the top.

John: You’ve got all that wet seaweed and that’s sort of boiling off and creating the steam.

Maureen: Right. The seaweed would probably create what you would think almost like an insulation. It would protect it and take it in there tight, just like a steamer would. Think of a perfect steam when you want to do it. You want to have the top really tight on the pot. The other thing that a lot of people don’t realize, when you do do the perfect clambake, whether it’s on the beach or on your oven or on your gas grill at your house, there’s not really a lot of water involved. It’s really a steam, not a boil. A lot of people don’t realize that when you cook this food. You really want to steam it. That’s how you keep that moisture in there and the food is not dry.

Supplies and Equipment for a Beach Clambake

John: Okay, compare that to the way that you might do a beach clambake, when you’re helping someone to have a party on the beach, what kinds of equipment and supplies do you use for that?

Maureen: I would say that one of our most popular phone calls, would be from somebody on a search saying, “I want to have a clambake on the beach. That sounds like so much fun. What do we [need] to do? Where do I go? Do you have any beaches you can go to?”

Maureen: Here on the North Shore of Massachusetts, there are a lot of beautiful beaches. A lot of great coastline. You’d be much better off if you had a private beach or private beach house, because there’s not quite as many rules and regulations. If you have a house that is right on the direct water and you’re lucky enough to have the sand, so say, for example, Wingaersheek in Gloucester, we do a lot of parties there at private homes. We’ll park the car in your yard and we’ll carry it down. We always have a tendency to put a young, strong crew on that clambake because usually, it’s what we call a long lug or a long walk.

John: Yes, you have to haul it up over the dunes.

Maureen: Carrying over the dunes and over the boardwalk. It’s hot out and there’s a lot going on there. It is really the ultimate fun if you can have it. You can also cook your clambake in your yard if you’re on the beach, walk the food down there in the pots, serve the clambake on a picnic table maybe and then you sit at the beach and you eat your steamers, your corn and your watermelon. You feel like you’re still having that feeling of a clambake on the beach. I don’t think there’s anything better than good food at sunset on a beach on Cape Ann. I think if you’ve been there, you’ve been fortunate enough to have one of those really great experiences. It’s absolutely beautiful.

Food Served at a Beach Clambake

John: Yes. What kind of food is most often served at a beach clambake?

Maureen: On a beach clambake, we’d like the food that’s not going to drop in the sand or get sandy if the sand starts blowing. Food that’s completely in its shell is always going to be good for you. The lobsters in its shell, the steamers are in their shell, the corn, I think, is pretty easy to eat. I think watermelon is really friendly on the beach. You just throw it on the picnic table and slice it up. I think you can get really messy and then go right in the ocean and wash your hands. I think that works out pretty well. Of course, you can have your coleslaw, you can have your clam chowder, you can have your chips and pickles. If you can have a steamed hot dog, that’s nice or you can bring your little Hibachi down with your clambake and you can grill off some hot dogs.

Other Considerations for a Beach Clambake

John: Okay. Any other things for people to consider when they’re trying to decide if they should do a beach clambake?

Maureen: One of the things that would be the hardest, again, if it’s not a private situation, you have a hard time getting a liquor license for a public beach. A lot of times, people are all gung-ho, “Yay, we’re going to have it on the beach” and then they find out, “Oh, there’s no alcohol there,” so sometimes that can be a deterrent if you’re looking to have a couple of craft beers or a keg of beer, [or a] couple of nice bottles of white wine with your clambake. You can makeshift and do something else and have soda and water or make some mocktails maybe to make it work out.

John: All right. That sounds great. Great advice Maureen, thanks again for speaking with me today.

Maureen: Thank you, John. Thanks for having me.

John: And for more information about Woodman’s catering services visit the Woodman’s website at https://www.woodmans.com/ or call 978-768-2559.

“Woodman’s of Essex is a culinary destination in and of itself.”